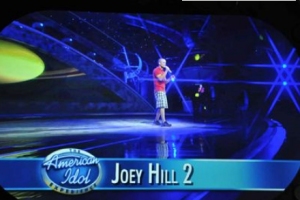 The American Idol Experience at Disney’s Hollywood Studios allows guests to get involved in the action.  They not only can vote for their favorite contestant and boo their least favorite judge but they also have the opportunity to be a star in the show.  That’s right, auditions are held everyday to find performers for each of the five shows during the day.  Only 15 are chosen a day and only 5 will move on to the finale show at the end of the day.  The one who is voted American Idol of that particular day receives the “dream ticket” allowing them to audition for the real American Idol show without having to wait in line!

Prior to my most recent trip I decided I would audition for the show and I made it! So I am going to take you trough what The American Idol Experience is like and offer some tips at the end for anyone who might be interested in showcasing their talent at Walt Disney World.

I showed up to the audition entrance and had to wait a few minutes outside.  I took this time to make sure I remembered the words and practiced my song a bit.  Once I was called into the building I then had to wait for one of the two audition rooms to open up.  There was a cast member there to explain how things would work and he also asked a little bit about myself.  When one of the rooms was available the cast member directed me in and introduced me to the audition judge and left me with him.  He spoke to me briefly and asked a few questions to get to know me a bit.  Then he asked me what I was going to sing and told me to begin when ready.  This first audition you are to sing any song (that is not your own) without music.  I had already researched the songs available to sing for the show and picked “Drops of Jupiter” by Train to sing for my audition.  After I finished he told me I did well and showed me a list of songs and asked if there were any others I knew from it.  At this point I wondered if he thought I was alright but needed a little more proof.  Unfortunately I did not really have anything else prepared and the list of songs was so long I had a difficult time singling one out.  As I was frantically attempting to find another song to showcase my talent he began reaching into his drawers and said,  “I tell you what, I like what I hear and I think you have a nice rock voice so I am going to send you to the next audition.”  I was shocked to be honest!  In all my preparation before the trip I did not really expect to make it.  I just thought it would be a neat experience just to try.  The judge handed me a button that said I auditioned (which everyone who audition gets) and a performer number.  Then he wished me luck and suggested another song that would be good for my voice. 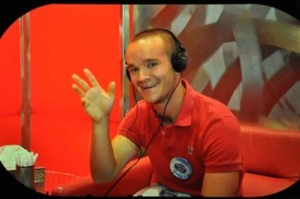 From there I went down the hall where they have a small room with ipods and headphones.  Now it was time to pick two songs to sing in front of the next judges.  All the songs on the ipod had a version with and without vocals and some even had the song in another key.  The words were also displayed on the ipod screen much like karaoke.  My first choice was “Drops of Jupiter” and for my second choice I went with the first judge’s suggestion which was Iris by The Goo Goo Dolls.  At this point my sister was allowed to be with me so she helped me with my songs and after practicing the songs a few times I went to the cast member and told her I was ready.  Then my sister and I went into the next auditioning room.  There I got to sing both of the songs I picked out with music and words just like karaoke.  I sang “Drops of Jupiter” then “Iris.”  Well I didn’t know “Iris” as well as I thought I did.  It is a little different when you have no one to sing along with so I didn’t do to well on that one.  They had me sing “Drops of Jupiter” again because they knew it was my strong song.  After offering me a few words of encouragement they played a clip of Ryan Seacrest who was going to tell me whether I made it to the show or not.  Well, it’s hard to build suspense when you know I made it already so I will continue. 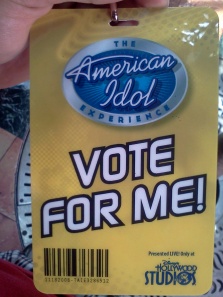 They congratulated me, wished me luck, and gave me a badge to wear around the parks letting people know I was going to be in the show and to.  From there they filmed a few “candid” moments (like me going out and telling my sister I made it even though she was in the room with me).  They used these clips in a video they put together for the show for each performer.

Once I was done with all of the filming I was free to go with a few hours before I had to be back to prepare for the show.  When I returned there were three other performers there even though only three would be in the show.  A fourth was brought back to fill in if one of the three did not show or did not want to go on.  Because the extra was not needed she was dismissed but was given a Fast Pass which basically allows her to get in any attraction with Fast Pass without waiting (don’t worry, I will cover this in the future).  I thought it was a sweet consolation prize!

to business!  Each performer was sent to have makeup put on so we would look pretty in the lights and on camera.  We each were given 5 minutes with a voice/performing coach which was very helpful for me.  After our coaching and makeup we had a quick run through of how the show would go and we each practiced our songs on stage.  Then it was show time!

The show from there ran pretty much like American Idol.  A video was played introducing each performer and after each contestant the judges gave their thoughts.  The judges were very much like the judges on the TV show.  One was the cool guy, one was the adoring lady and the last of course was the grumpy critic.  After all the performances the audience votes for their favorite singer and the winner is announced.  The winner of each show comes back for a finale show at the end of the night.

The American Idol Experience was the highlight of my trip.  It was such a fun and unique experience that only Disney could offer.  The cast members were amazing!  The back stage cast members did a great job making sure we felt comfortable and had a great time.  The 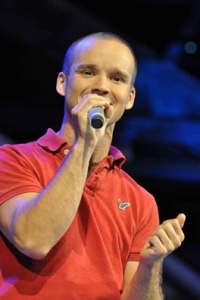 host and judges made the show very entertaining and authentic.  The audience was fantastic as well.  They cheered for all the performers and booed the grumpy judge.  After the show numerous people told me I did well and that they voted for me.  Later in the day we were in line for Toy Story Mania and a little girl motioned for me to come over and bend down.  Once I did she shyly said, “You rocked on American Idol.”  Cutest thing ever!  The next day I was looking for a place to sit in a restaurant and a guy yelled across a patio, “Hey, I voted for you!”  It was a pretty good feeling to hear all of the encouragement from the audience during and after the show even though I didn’t even win!

If you have any ability to sing I encourage you to audition your next trip to Walt Disney World.  I assure you, even if you do not make it to the show, it will not be a bad experience for you.  I want to share a few tips to those who might be interested auditioning for the show:

4 Responses to The American Idol Experience