I jokingly said the only reason I signed up to run the Disney Marathon was because I knew my fiance would come to support me.  Thus I would get her to Walt Disney World before we got married.  A test…….if you will.  One: to see if she could handle living with a Disney geek.  She knew I was crazy about the Mouse but had never seen me released in The World.  Two: to see her reaction to Walt Disney World as there will be many more trips in our future.  Though I jest, I have to say the trip was a success!

Unfortunately our time was limited to 4 days this trip and 2 of them ended up being half days as far as park time goes but I think it was enough to whet her appetite!  We drove down after work on Friday and arrived at her friends house in Orlando at 4AM.  We slept for almost 5 hours before having breakfast at a wonderful local cafe.  We stopped by ESPN Wide World of Sports to pick up my race packet before heading to our first Disney home, All Star Sports Resort.  This was my first time visiting Wide World of Sports and though we were practically running in and out so we could get to Animal Kingdom, it was cool to check out the complex!

Usually I do Kilimanjaro Safaris in the  morning but since we got a late start we had FastPass+ reservations for the evening just before sunset.  I have now been converted to an evening Safari guy!  Even if the animals aren’t active the savannah is beautiful at sunset!  I would go even if there weren’t any animals!  From a photographer’s prospective, it was a great change!  Fortunately there were animals and they were more active than I have ever seen!  We saw two cheetahs interacting and playing with each other, had the best views of the lions I have ever had, and saw the elephants playing.  Some were chasing each other and one performed a nice little dance for us!

We ate at the newly renovated End Zone Food Court several times during our trip.  I rarely eat at my resort but really enjoyed the create your own burger option and my fiance even had a veggie burger twice.  They cooked the burger right in front of you which took a little while but you know if was made fresh.  There were several toppings and three different sauces that you could choose from.  The garlic sauce was addicting but does a number on your breath!  The Food Court looked very good and clean and Disney even added a tribute to Hidden Mickey guru Steven Barrett.

We woke up at 3:45am to get ready to head to the marathon starting line.  I brought headphones so I could listen to music while I ran but there were so much going on throughout the whole race that I never put my headphones in!  My sister and her husband also came to cheer me on.  They all bounced around all over Walt Disney World to encourage me.  I was surprised at how many places they were able to meet me.

After a quick rest my fiance and I headed back to Epcot around 3 so are time was limited.  We had FP+ for Soarin’, Mission Space, and Nemo (not that it was needed), and we used singler rider line for Test Track.  My appetite finally came back so we ate at Sunshine Season and then played around in Innoventions some.  We had a little time before having to stake our claim to our IllumiNations spot so I took my fiance to see the jumping fountains that she saw when she rode the monorail while trying to meet me during the race.  Unfortunately we never made it to World Showcase this trip but now we have a reason to go back right?

We were sure to be at Hollywood Studios for rope drop so we could do the mad dash to Toy Story Mania.  They let us in early and we rode Toy Story once before the park officially opened.  They standby queue was showing 30 minutes after our first ride so we decided to go back through.  After our second go round it was time for our FP+ so we rode a third time!  It was glorious but our arms were sore!

We also had FP+ for Tower of Tower and Rock ‘n’ Roller Coaster.  We rode The Great Movie Ride twice because the second time we wanted to look for all the hidden Mickeys.  My fiance loved hunting for hidden Mickeys.  She also loved the Indiana Jones Epic Stunt Spectacular!  She loved the joke and punchline in the show for those of you who are familiar with it.  We ended the day on the back row (the best spot I think) viewing Fantasmic!

We ended our trip in Magic Kingdom.  It started off rainy but didn’t really do anything except make the crowds lighter.  We hit Space Mountain 3 times included our FP+ option and the Tea Cups twice (kids at heart)!  We used FP+ for Enchanted Tales with Belle and I was selected to be a suit of armor.

We ate lunch at Be Our Guest Restaurant which was fantastic!  We made reservations online before our trip so we wouldn’t have to wait in line for 30 minutes.  We even preordered our meal to make it faster but they seemed to be having system issues that day so we had to reorder anyway.  I will spend more time on this subject later. 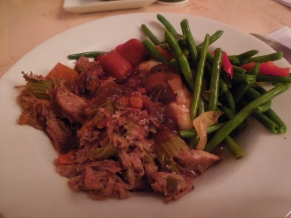 We were so busy running around having fun we waited too long to eat dinner.  Our dining locations are a little limited since my fiance is a vegetarian and by the time we tried to find food most of the places with good veggie options closed already so we just chilled between the hub and Main Street waiting for Celebrate the Magic and Wishes. 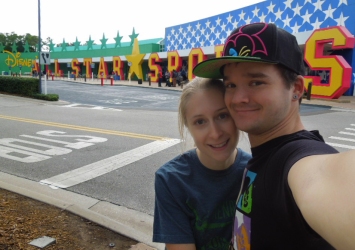 This was the first of many but we had a great first trip together!  It wasn’t near long enough but it was definitely enough to get her excited about going back.  She is already excited to go back and explore the many places we weren’t able to get to this trip.

Sorry for the long absence and the long post but stay tuned into the blog.  I have some big changes coming that I am excited about!

Ready to start planning your next trip?  Book with Magical Vacations by Me at (314)494-9166 or joey@magicalvacationsbyme.com