Monsters Take Over the Monorail

It seems that Disney is promoting upcoming movies more and more in its Parks.  A few that had a pretty substantial presence in the Parks were Alice in Wonderland, Brave, Tron, Wreck it Ralph, and the latest, Oz the Great and Powerful.  The new film in town is Monsters University set to release June 21, 2013.  There is already merchandise, special meet and greets, parades, a giant monster (Sulley) projected on Spaceship Earth, and last but not least the beloved monorail wraps.
Some are critical of Disney 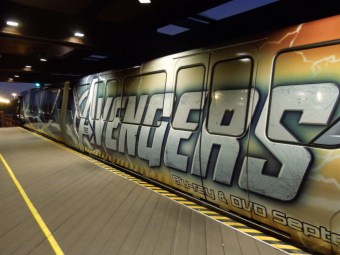 wrapping their precious monorails in “advertisements” but I enjoy seeing these special monorails.  Some of the wraps we have seen in the past are: the Tronorail (Tron) and the Avengerail (The Avengers).  The new wraps showing up are known as the Iron Manorail (Iron Man 3) and the Monsterail (Monsters University).  The Monsterail isn’t as elaborate as the other wraps we have seen in the past but that does not at all reflect the hype of the upcoming release of the prequel to Monsters Inc.!  Disney seems to be letting Monsters take over their parks.  Disney is going all out to promote Monsters University not only in their parks but also online.  They have created an elaborate website completely dedicated not just to this film but the idea of this film.  As I have said before and will continue to preach, Disney is all about selling the story whether it is on film, in the parks, and now even online!  You see the same attention to detail in this site as you would in the parks, meaning there is almost more story than you could possibly pick up on.  You could probably spend hours looking through this site much like you may have done when looking for colleges for yourself or a family member.  Interested in Monsters University?  Visit the website at: http://monstersuniversity.com/edu

2 Responses to Monsters Take Over the Monorail