There’s a new mermaid in town…

A new mermaid has swam into the Disney picture.  Maybe not as well known but certainly older than Ariel, the mermaid whose association with coffee no one seems to question (what’s up with that?) will now also be associated with Disney.  Recently Starbucks, an entity only 7 months older than Walt Disney World has agreed to a deal to serve their product in Disney Parks.

Now I don’t consider myself to be a coffee snob.  Yes, I frequent the coffee from gas stations and I even occasionally drink the coffee at work (proof that I’m no coffee snob…or am really desperate!).  I may subject myself to “lesser” coffees but I still like to treat myself to a nice, maybe overpriced, cup of quality coffee at times.  Actually, I happen to be doing that right now!

At my favorite coffee house…not Starbucks

It will be a rare occurrence for me to ever speak or write anything criticizing Walt Disney World and you are about to witness such an occurrence.   Give me a moment while a muster up the strength to type these next few words words………………………………

Okay I think I’m ready.  One of the most common criticisms I stumble across in the WDW forum/blog community is about the coffee served on site and though it pains me to do so…I agree.  The way I tour the parks requires coffee so I can attest to this complaint.  The way I tour the parks some refer to as “commando style.”  I know you just pictured me touring the parks in the nude!  I know you did!  Come on!  Seriously!  Yeah, I agree, I need to come up with a new name.  Anyway, back on topic…The best way to explain the way I tour is this:  The hotel is only a place to take a nap while the parks are closed.  Taking that in to consideration along with the fact that my sister, brother-in-law, and I drove the entire way to Florida from Missouri in one shot, coffee was more a necessity than a luxury and the taste was a testament to that.  I filled my coffee mug in the food court of our hotel every morning before I hit the parks and that coffee and the “Disney adrenaline” as my granny calls it, is what gets me through to my next nap time.

With the exception of a few restaurants scattered throughout the World, the brew on Disney property doesn’t really measure up to the Disney standard in my opinion.  I shall not go into theories as to why.  Instead let us focus on the good news.  A better brew is on its way! 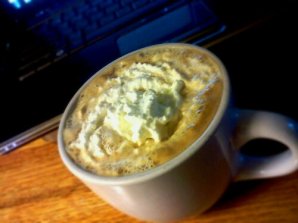 Now you may think Starbucks coffee is overpriced but if you have ever blown a five dollar bill on a cup of coffee there I think it would be difficult to argue that it is a quality cup of joe.  Come on, admit it.  Yes it may be a bit pricey and I would rather spend the same at a local coffee house but I cannot deny that it is good coffee.  I will also admit the new deal between Disney and Starbucks will make my coffee selection a bit difficult.  Do I save money by forcing down a crappy cup of coffee or do I spend a little more dough for a better cup of joe?

When I am on WDW property I don’t want to be reminded that the outside world exists so I definitely wouldn’t want to walk into a typical Starbucks that I can go to just down the road from my house.  So I was pleased to hear in the WDW blog buzz that the Starbucks stores that will be coming to the parks will be themed in accordance to their location to maintain the allusion and story.  Story telling and theming is an area of expertise for the Disney company who has perfected the art and I would argue that no one does it better.  I think there is great potential for these stores and think it would be great if they could theme the products to either the stores location within the park or with the Disney brand.  I’m not sure if Starbucks would go for that but there is a lot of potential for fun ideas.

Disney has been part of many great “marriages” through the years: George Lucas, Jim Henson, and recently James Cameron just to name a few.  I believe this new marriage to be a good one.  Starbucks is a very successful company that strives for quality in its products and customer service which meshes nicely with Disney’s business reputation.  The first store is set to open in Disneyland and there will be more to follow in each of the parks in Walt Disney World.  I think it is great that Disney is finally going to make a quality cup of coffee more readily available to its guests.  Hopefully I will be able to partake in October!

1 Response to There’s a new mermaid in town…