Disney debuted a new test in the FastPass+ system at Epcot earlier this month and now that test seems to have made its way to Hollywood Studios.  At both Epcot and Hollywood Studios, guest can no longer select any three participating attractions as their FastPass+ reservations.  Guests will still be able to select three attractions but the attractions have been put into two categories.  They will get one selection form category A, which is mostly headliners, and two selections from column B which consists of the rest of the FP+ attractions.  If you have already made your selections fo 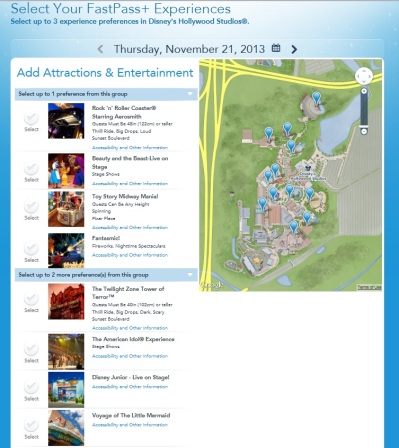 r Epcot or Hollywood Studios before this switch and were able to choose more than one headliner, keep in mind if you alter your plans you will have to make your new selections according to this new system.  My FP+ selections for Epcot during marathon weekend are under this new system but I was able to schedule my Hollywood Studios reservations before the switch so I do not plan to change mine because I like my Toy Story Midway Mania, Rockin ‘n’ Roller Coaster, and Tower of Terror selections!  Below are the current selections for each park.

Column A (Choose ONE preference)

Column A (Choose ONE option)

Ready to test MagicBands yourself?  Book with Magical Vacations by Me at (314)494-9166 or joey@magicalvacationsbyme.com and be entered for a chance to win a $500 Disney gift card!!! See details here.  Also be sure to check out the special offers page.

6 Responses to FastPass+ Changes at Epcot and Hollywood Studios